Who Made the First Optical Encoder? 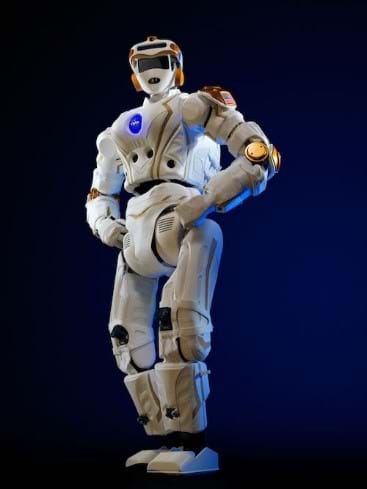 Who Made the First Optical Encoder?

We have been researching the answer to that question for some time and although we have been able to gather some great information both from encoder manufacturers and my own research, at this point we do not have a definitive answer. 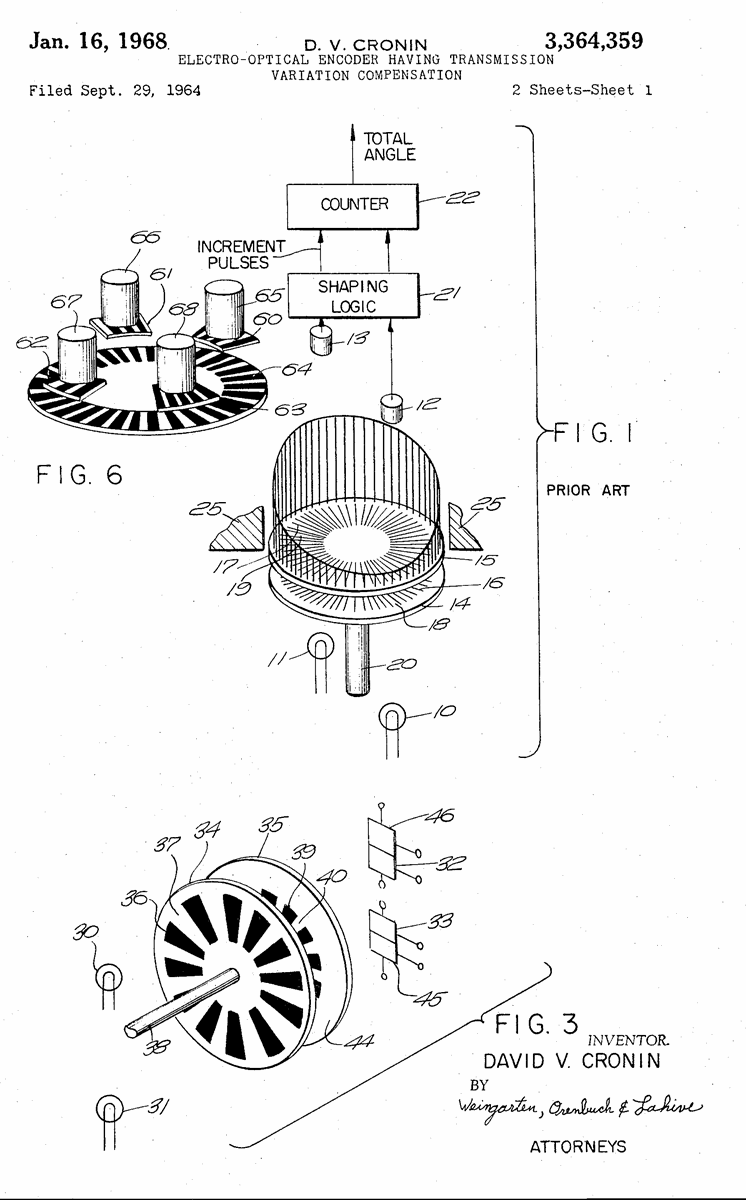 When we initially tried searching for an answer, someone had answered the question online stating that the first optical encoder was made by David Cronin in 1964 - based on the date of his patent application (seen above). 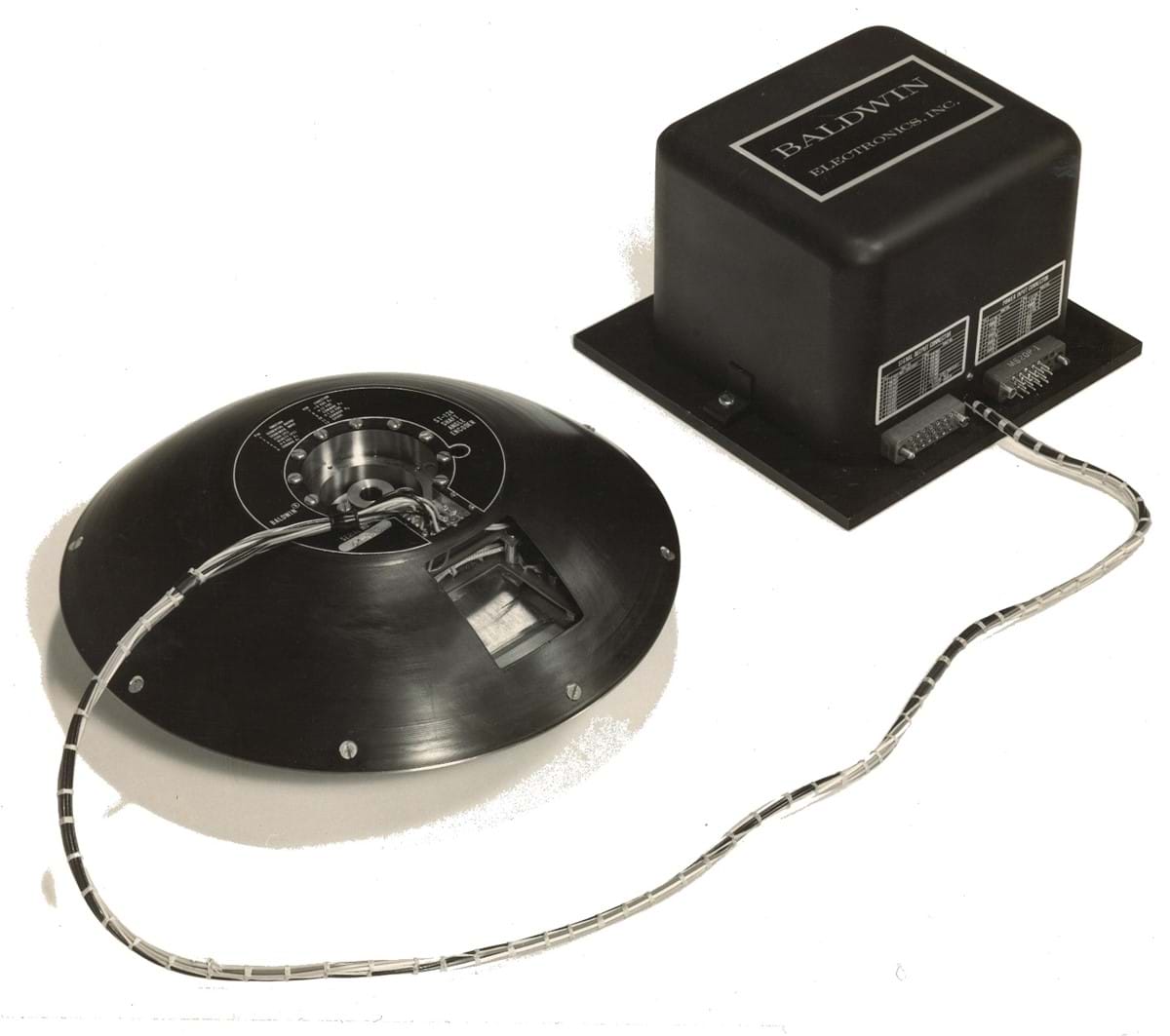 According to chapter 14 on encoders in Space Vehicle Mechanisms: Elements of Successful Design (A textbook that has been used by NASA), Tim Malcolm states that optical encoders were developed about 1951 to address a need for higher resolutions than what was available with other kinds of sensors. In 1958 Baldwin Electronics (now BEI Precision Systems and Space Company, Inc.) provided 18-bit optical encoders which were used in the Atlas missile guidance system. Those encoders were still functioning 36 years later when that article was written.

Back at the beginning, the life of the light source limited the encoder life. Many illumination sources were used based on the technology available at the time. Some light sources used include xenon flash tubes, incandescent lamps, and neon lamps. The first encoder used in space incorporated a redundant gas-filled incandescent light source but it only had a life requirement of 12,000 hours. 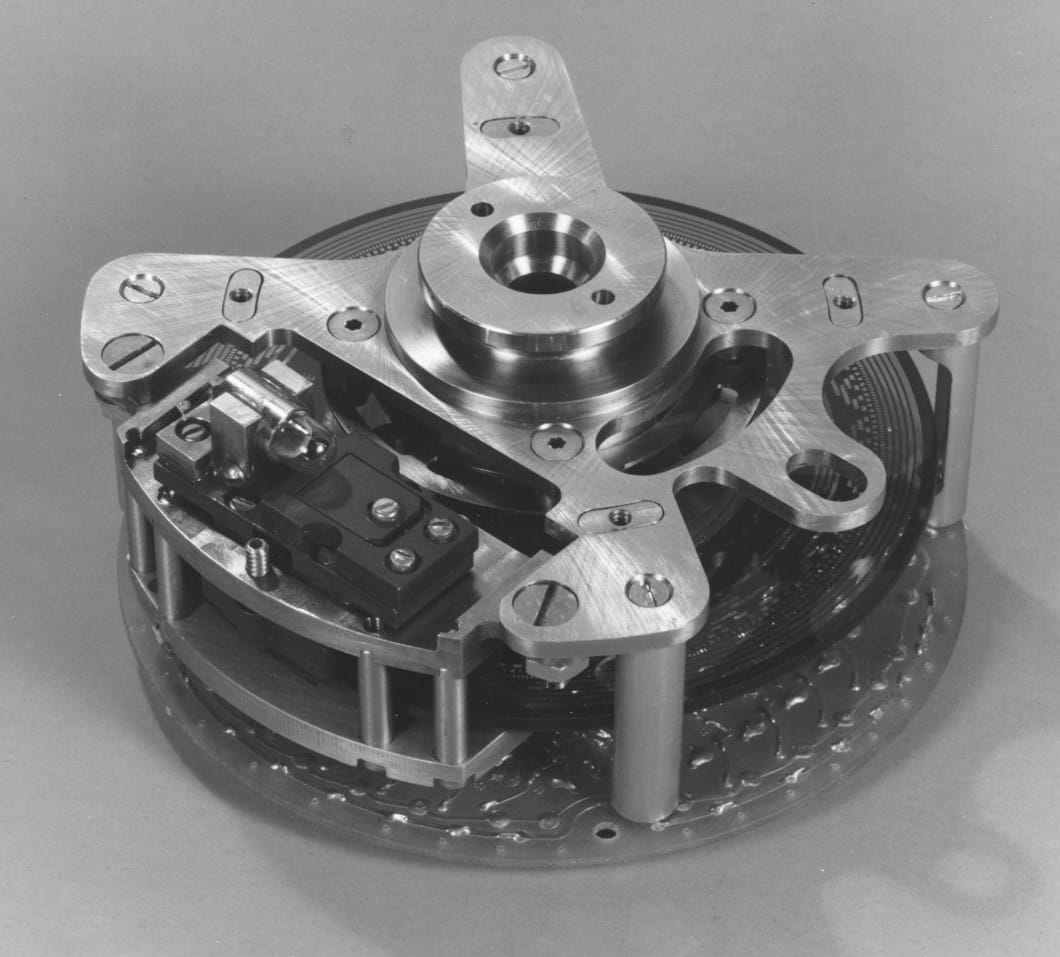 LED's were a big step forward by providing extended lifetimes with very little degradation. You may have heard a statement that optical encoders have reduced life due to dimming or burning out of the LED. Statements to that effect are contradicted by the chief scientist at BEI. In this same chapter, Tim Malcolm states as of the writing of the chapter (1996), "the concerns with the quality and life of these devices (LED's) which were common years ago have largely disappeared." He also noted that some encoder manufacturers had more than 10 years of continuous use with no encoder failures. Based on those statements, it would be safe to conclude that if your encoder supplier is using high-quality LED's, this should not be an issue.

We were fortunate enough to be able to get in touch with Timothy Malcolm and found out that the first optical encoders were actually made near the end of WWII. Although war is very costly, it has always been a great driver for the the development of new technologies. We will plan to share more about that in our post on May 28th. 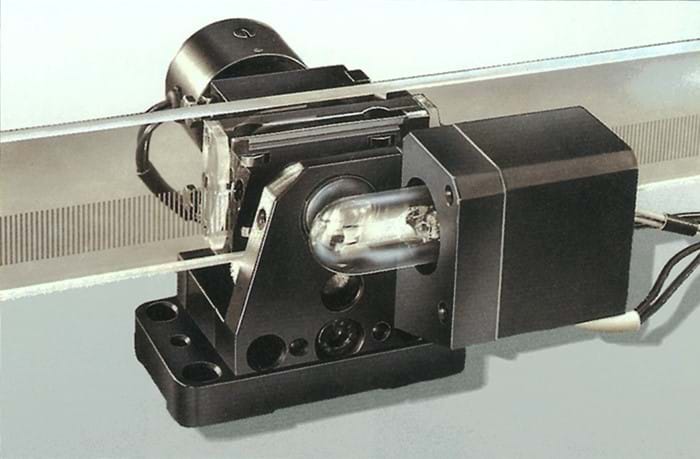 In a future post, we will provide information on how several of the oldest encoder companies came into being. The above photograph shows an optical counter made by Heidenhain, in the early 1960's, for accurate, reliable and easy positioning of slides and carriages on machine tools, gauges, and other instruments. It could actually measure measurements as small as 0.0001" - which is remarkable for that time period.

Encoders have been a key ingredient to space exploration in general from its inception. This is definitely true for NASA. We recommend checking out NASA’s website and articles like this one which mentions how they are used on the International Space Station on cameras to view earth. Here is also a video which gives some background on Valkyrie, the humanoid robot at the top of this post.