What's the difference between optical, magnetic and capacitive encoders?

Are you wondering what the difference is between optical, magnetic and capacitive encoders? While all of these options are great for tracking position, speed or rotation of a shaft, the way they work can lead to advantages and disadvantages in different situations.

Before we get into specifics, this post covers the the general advantages and disadvantages of encoder technologies. Some of these advantages may not be true when you start talking about specific encoders, they are more meant as guide posts to help you understand how things work in general. Let's get into it.

How do optical encoders work?

Optical encoders have been the most common encoder technology used for many years. To this day they provide the highest levels of precision, accuracy and resolution. Rotary encoders use an optical sensor to detect light that is transmitted through a disk (transmissive) or reflected from a disk (reflective). The disk is also sometimes called a code wheel. The transmissive optical encoder disk has alternating transparent and opaque lines. When the light is received by the sensor, the encoder puts out a high signal. Conversely, when the light is blocked by a line on the code wheel, the sensor puts out a low signal. On a reflective encoder disk the alternating lines are reflective and non-reflective. With a known pattern on the disk, the distance moved and speed of movement can be obtained using the signal information. Linear encoders use the same method with the only difference being a strip is used in place of rotary disk.

How do magnetic encoders work?

Use of a magnetic encoder may be preferable to an optical encoder when there is a chance for an optical disk to become fogged as moisture condenses on the code wheel. Consider an application where an optical encoder is held at a very low temperature and then the ambient temperature quickly increases. This quick temperature change can cause condensation on all surfaces of the encoder, including the optical code wheel. When the code wheel surface collects droplets of moisture, the light transfer of the code wheel image to the optical sensor can become distorted and a false or missing signal may occur on the output. With a magnetic encoder design, condensation of moisture is not an issue with the rotating magnet and magnetic sensor.

How do capacitive encoders work? 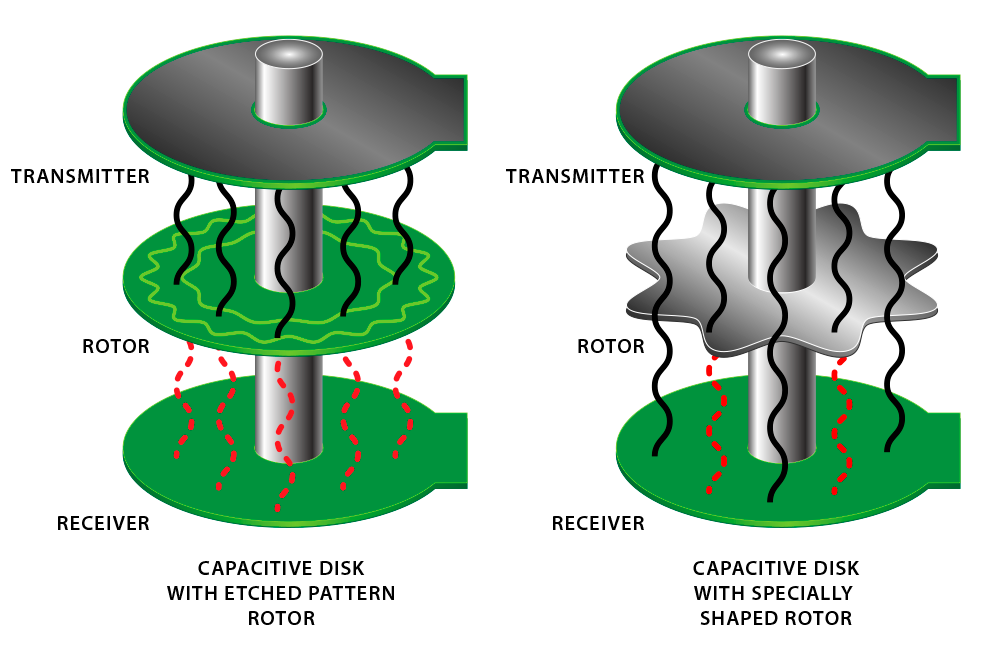 Capacitive encoders are a newer technology but inherently possess all of the same environmental advantages as the magnetic encoders. A capacitive encoder detects the changes in capacitance using a high frequency reference signal. The rotor has either a pattern etched into it or uses a specially shaped design as in the above drawings. When this rotor moves between the transmitter and receiver, that pattern modulates the high frequency signal of the transmitter. The receiver reads the modulations and those changes are translated into increments of rotary motion. Although capacitive encoders can be more susceptible to noise and electrical interference—the manufacturer of the encoder can mitigate that potential issue with appropriate engineering. Another benefit of using a capacitive encoder is the typically lower current draw - 10 milliamps is not uncommon.

There are advantages and disadvantages of each technology used. Our suggestion is to determine your requirements and then compare specifications to ensure the encoder you are looking at will meet your needs.